Rethinking Education: Getting to Know the Stony Point Story 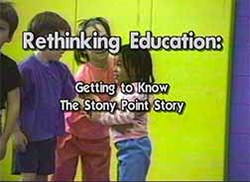 As a parent in Fayette County Schools, Lisa Bhavsar* knows firsthand the hopes, dreams, struggles and doubts parents, teachers and administrators are experiencing in the wake of the Kentucky Education Reform Act.That's why she created, directed and produced "Rethinking Education: Getting to Know the Stony Point Story," a 57-minute educational documentary with the purpose meant "to educate, paint a realistic picture of what's involved in successful change, to offer hope and instill confidence in the merit of the tenets of KERA."
You can view the documentary on Jan. 12 at Central Librarythe Lexington Public Library downtown. A panel discussion will follow.
For the documentary, Bhavsar, 32, focused the documentary on Stony Point Elementary School in Charlottesville, Va., which has been successful in implementing many KERA principles of KERA. Bhavsar and her family, including her only daughter, Ayesha, who attends Dixie Magnet School, were livinglived in Charlottesville while her husband was on a one-year sabbatical from the University of Kentucky.''I liked the way she (Ayesha) was treated and how the teachers allowed the students to make choices," said Bhavsar, who finished the documentary this past in July.
Ayesha also enjoyed making choices.
''A lot of it was freedom," she said. "I liked when they said we were going to do a holiday play. That didn't mean it was just about Christmas, we got to make up what we were going to do. We did Hanukkah , Kwaanza and Christmas. There was freedom and choice."
Making the documentary
After seeing for herself an environment where those KERA philosophies were embraced, Bhavsar, originally from Chicago, thought making a documentary was the most powerful thing she could do to convince Kentucky parents and teachers in Kentucky of KERA's merits.''When I saw what was happening at Stony Point Elementary, I knew I had to do something to bring its beauty and success back to Kentucky with me," said Bhavsar, who works part-time at Michler Florist & Greenhouses and owns her own small business, "Underart," which specializes in hand dye-painted garments and embellished accessories.
Bhavsar made the documentary with no financial help whatsoever. All of the equipment she used was donated. She also had an educationally-involved videographer and videotape editor who are involved with the schools volunteer their time and expertise. Stony Point faculty members and the Kentucky Education Association, Virginia Education Association and Prichard Committee for Academic Excellence were among those that gave moral support.
''This documentary is a good resource for the public to see," said Nawanna Fairchild, director of elementary curriculum and instruction for Fayette County Public Schools, who will participate in the panel discussion on Jan.12.
''The documentary shows that this primary program is a national endeavor that is being successfully implemented across the country. It's another example outside of Lexington of how children learn best," Fairchild said.
And in July, in the final hours of the project, Bhavsar realized she had something special.
''After editing videotape non-stop for 13 hours, it dawned on me that I had created a beautiful quilt," she said. "There was no script and I just picked out the pieces and fit it all together like a beautiful quilt with its colors and designs."
Education is important to Bhavsar. She volunteers as a classroom facilitator at Dixie Magnet, working with individuals and small groups, developing and teaching units to classes through experiential learning projects.
Bhavsar, a member of the Fayette County Prichard Committee Affiliate Community Committee for Education, also taught English as a second language at the Regional Institute of English in Bangalore, India.
While there she created and recorded language lab exercises discussing controversial issues and introduced debate to spoken English tutorials.
'The Community'
Bhavsar's, who is originally from Chicago, spent her last two years of high school were spent in an alternative education program called The Community, which was within New Trier West High School in Northfield, Ill.
''It was in The Community that I learned how to learn," Bhavsar said. "We were given responsibility for our education, from determining what we wanted to learn to how we were going to learn it."
She also learned how to use the local community as a resource for finding facilitators adults who would help, guide and evaluate.
Learning how to learn
"The job that comes with involvement in one's learning process has been one of the most valuable tools for success and living," said Bhavsar, who would like to continue with make other educational documentaries. "It is because of this experience that I feel confident that the world is my classroom, and I can learn anything I want, anywhere I am."
And Bhavsar wants to see Kentucky education reform succeed in Kentucky.
''I want Kentucky to become a model for the nation," she said. "I know it can succeed because I've seen it work. The message 'Everyone's got to be on board' is crucial."
Lisa Bhavsar will show her educational documentary, "Rethinking Education: Getting to Know the Stony Point Story," from 7 to 9 p.m. Jan. 12 at the Lexington Public Library's main branch, on Main Street.Following. After the viewing, a panel discussion will be held with featuring Nawanna Fairchild, director of elementary curriculum and instruction for Fayette County Public Schools; Gail Toye, principal of Northern Elementary School; Debi Steele, Linlee Elementary School teacher; and Bhavsar.
Free baby-sitting is available for up to 15 children, but reservations must be made in advance. To make reservations, call the library at 231-5530.